Once simply ornamental in nature, the button as a means to fasten clothes has been around since 13th century Germany. Since then, a wide variety of materials like wood, clay, shells, and plastic have been used to make buttons in every size, shape, and color. A button jar can morph into a great craft project, extra game tokens, or fashion embellishment. Sure, we have zippers and Velcro now, but buttons are just more fun, interesting, and whimsical. Buttons can even be works of art, so take time to appreciate those useful, pretty little things on National Button Day.

​2014-A button that was once part of a Texas confederate navy uniform circa the Civil War sold for over $2,000.​

​1900-Noting the abundance of pearl mussels in nearby waters, a German immigrant opened a button-making factory in small town Iowa, which soon grew to be the largest manufacturer of pearl buttons in the world.

1896-​Polo players were the first to button down their collars to stop them from getting in the way during a match; Brooks Brothers copied the look and created a lasting trend in 1896.​

​1300-Europe was so button crazy, the church started calling them the “devil’s snare.” This was probably because most women’s clothing of the time buttoned up the front.​

​3 Facts To Really Push Your Buttons

I found this great website that has dozens of crafts you can create using buttons. So celebrate National Button Day by making something you can wear or decorate your home with!

Whether you’re a sewing master or an all-round crafter, you may be one of the many who have a big collection of buttons stashed away. There’s no way that you’ll be able to use them all up on fixing buttonless shirts, so perhaps it’s time to think outside the box a little. These cute and clever button projects will give you some fantastic inspiration with regards to putting your collection to good use in non-traditional ways.

This cute and whimsical button bowl is the perfect way to store your little bits and bobs like jewelry or keys. It uses the same method as the cotton thread balls where you use a balloon to create the shape you want, much like a mold, which is then popped and discarded once everything is set and dried. DIY Instructions and Project Credit – DIYnCrafts

Everything you make doesn’t always have to be grand or complicated; you can make something as simple as a button bookmark with a paperclip that you know will be put to good use. It’s a quick and easy craft that can really help your school-going kids. DIY Instructions and Project Credit – IHeartNaptime 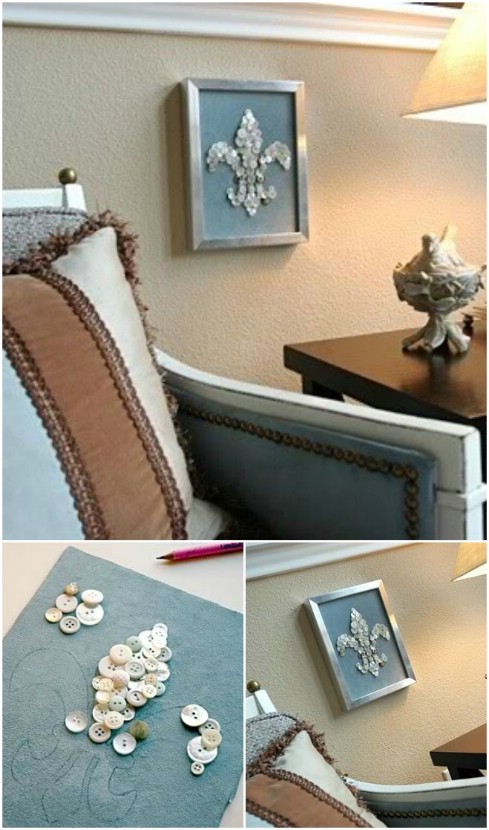 I just love this fleur-de-lis symbol, although, of course you can go with practically any image or monogram as long as it’s not too detailed or finicky. The best part about this project is that you don’t have to sew the buttons – you can cheat and just glue them on! DIY Instructions and Project Credit – Makely 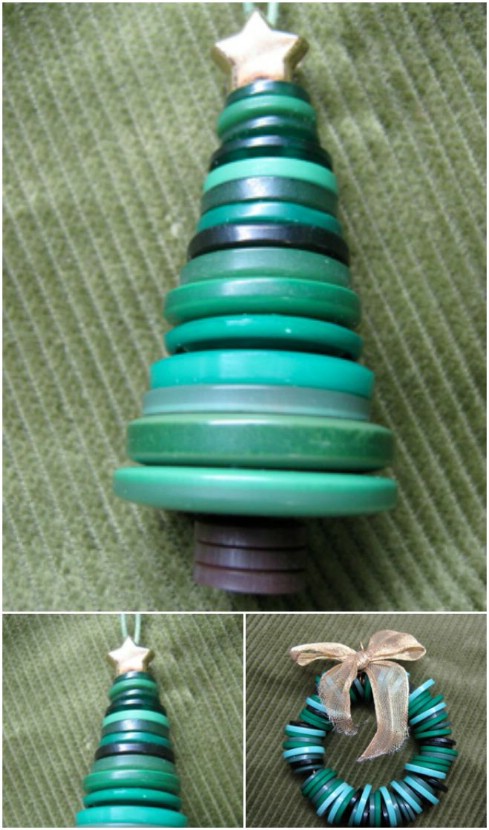 If you have a good range of sizes among all your forgotten buttons, then you may be able to make yourself a few of these charming Christmas tree ornaments. If you don’t have enough greens, though, you can either spray paint them or simply embrace the non-traditional colors. DIY Instructions and Project Credit – ModernMinerals

Whether you want to vamp up an old pair of shoes, or you found a plain pair on sale for next to nothing, a really cute way to do so is to add buttons. You’ll have to take the longer sewing route with these; when considering all the movement of your feet in your shoes, the buttons may just pop off if you use hot glue to attach them. DIY Instructions and Project Credit – StarsForStreetlights, ILoveToCreate and Scrapbook&CardsToday 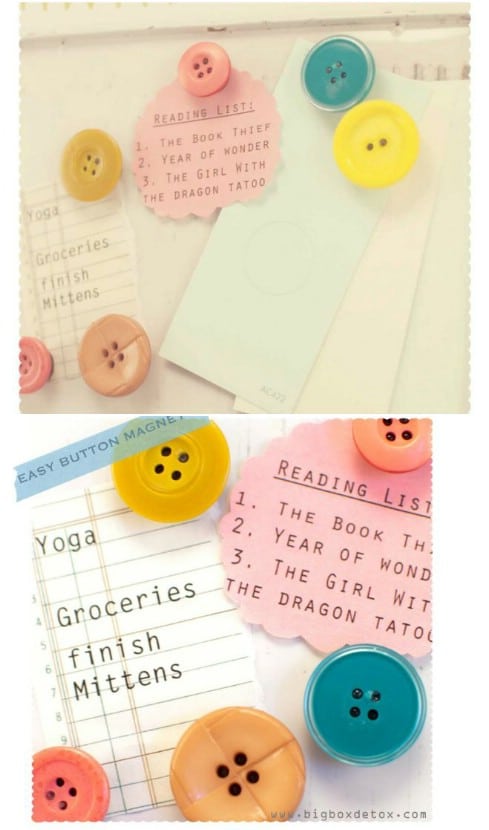 Ok, so here’s a really nice and easy craft that is so simple, yet people don’t seem to think about it – button fridge magnets! It really is as easy as it sounds: glue magnets onto the buttons and you’re good to go! It adds a fun and playful element of whimsy to your kitchen. DIY Instructions and Project Credit – BigBoxDetox

There are so many ideas and ways that you can make some really pretty and interesting necklaces, ranging from simple to intricate to chunky, so I’ve found a handful for you to gloss over and get some inspiration for your own creation. Or, you could just make them all! DIY Instructions and Project Credit – YellowBlackbird, Ohoh, TheDrewFamily and LittleMissMomma

As with the necklaces, your button bracelet making possibilities are seemingly endless. There are so many techniques that you can use, so once again, let your own imagination and creativity run wild and see what you can make with the types of buttons that you have. DIY Instructions and Project Credit – OhDearAngie, ResinObsession, HopeStudios and HomesteadRevival 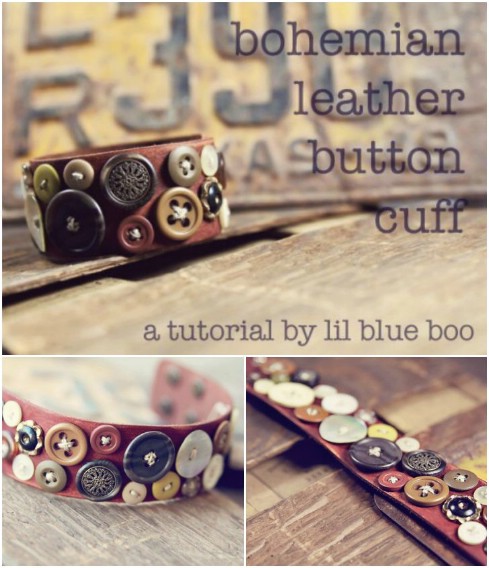 I love all things bohemian, so this leather button cuff is right up my alley. If you can get the blank leather cuff with all the hardware on it then you’re already halfway there, otherwise you’ll just have to attach those yourself. This could make a really interesting belt idea, too! DIY Instructions and Project Credit – LilBlueBoo

This is just too cute! It’ll perfectly adorn something like a nursery or child’s playroom. After seeing the tutorial, it’s clear that you can paint and button just about any image, but the cupcakes are definitely my favorites! DIY Instructions and Project Credit – BustedButton 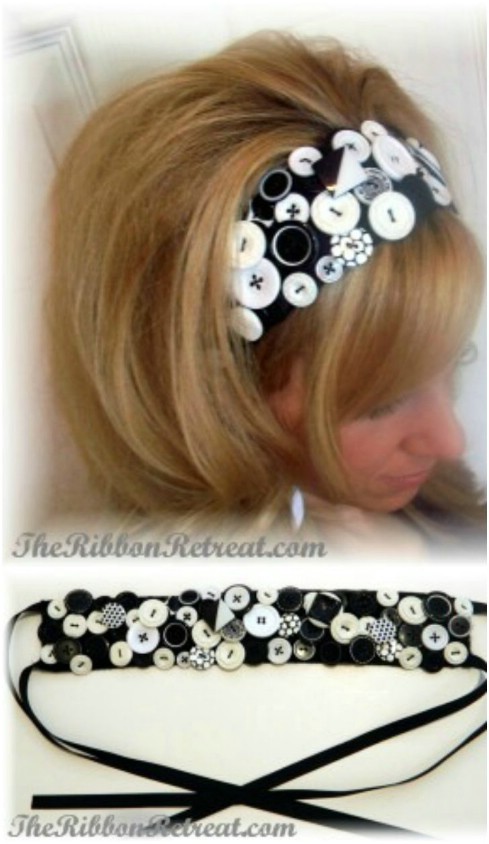 Making a really cute button headband is actually really easy. The toughest part is just deciding on which buttons to use and how to arrange them – you can cover the entire piece of fabric, or you could just make a little accent part on the side. DIY Instructions and Project Credit – TheRibbonRetreat 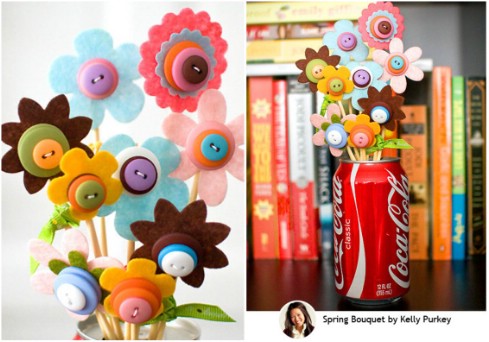 These felt and button flowers are just adorable, and they’re so much fun to make, too! You could get your little ones involved in the project so that they can proudly display them in their rooms, or even give them to their teachers as gifts. DIY Instructions and Project Credit – AmericanCrafts 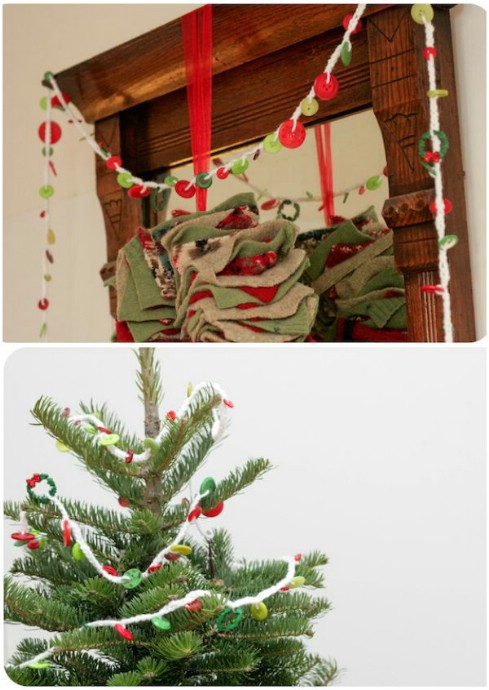 This Christmassy garland is a real cinch to make if you can do a simple chain stitch. I love the holiday themed colors that can turn your home into a real festive place, but of course, you can just pick any colors for absolutely any time of the year. DIY Instructions and Project Credit – BlogALaCart

The appeal of buttons is clear. They come in every shape, color and style, from pearly white shirt buttons, to ornate Victorian affairs, to cute fastenings shaped like insects and animals. Any outfit can be updated by adding the right buttons, and sewing them on is one of the easiest types of needlework to learn. And they don’t just belong near buttonholes, either. Clusters of buttons can be used to decorate almost everything, and even on their own in jars they are delightful to handle, play with and admire. Some collect them, but most just lose them. Regardless, nearly everyone seems to love them, or at least regard them with fascination.

In case you may be thinking that buttons do not deserve their own holiday, try to imagine what life would be like without them. Sure, we have zippers and velcro, but could you imagine velcro down the front of your elegant blouse? Of course not!

Button, usually disk like piece of solid material having holes or a shank through which it is sewed to one side of an article of clothing and used to fasten or close the garment by passing through a loop or hole in the other side. Purely decorative, non-utilitarian buttons are also frequently used on clothing.

In medieval Europe, garments were laced together or fastened with brooches or clasps and points, until buttonholes were invented in the 13th century. Then buttons became so prominent that in some places sumptuary laws were passed putting limits on their use.

By the 14th century buttons were worn as ornaments and fastenings from the elbow to the wrist and from the neckline to the waist. The wearing of gold, silver, and ivory buttons was an indication of wealth and rank. Expensive buttons were also made of copper and its alloys. The metalsmith frequently embellished such buttons with insets of ivory, tortoiseshell, and jewels. More commonly, buttons were made of bone or wood. Button forms of these materials were also used as foundations for fabric-covered buttons. Thread buttons were made by wrapping the thread over a wire ring.

In the 18th century luxury metals and ivory largely replaced fabric, although embroidered buttons in designs to complement particular garments were popular. Pewter, the familiar metal of the age, was used to make molded or stamped-out buttons, but these were scorned by the wealthy. Cast brass buttons, particularly calamine brass, with ornamental and distinguishing designs, also became popular on both military and civilian dress.

In the middle of the 18th century, Matthew Boulton, the English manufacturer and partner of James Watt, introduced the bright, costly, cut-steel button, which was made by attaching polished steel facets to a steel blank. In France the facets of the cut-steel button were elaborated by openwork designs. During the first quarter of the 19th century, a less costly stamped steel button was made in an openwork pattern. Brass buttons that were gilded by dipping in an amalgam of mercury and gold also became popular.

The two-shell metal button was introduced about the same time as the stamped-steel type by B. Sanders, a Danish manufacturer in England. The two shells, thin metal disks enclosing a small piece of cloth or pasteboard, were crimped together on the edges. Sanders also originated the canvas shank. By 1830 fabric-covered buttons were being made mechanically. Also coming into use were animal horns and hoofs, which could be made malleable by heating and then could be cut, dyed, and molded.

Buttons were also made of ceramics and glass. Porcelain buttons became a French specialty; they were decorated by hand painting or by transfer printing designs using colored inks. Bohemia, in the present-day Czech Republic, produced most of the colored glass used in button manufacture.

In Japan, ceramic buttons, hand painted in traditional motifs, were developed. Buttons with an intricately carved thickness of vermilion lacquer on a wooden base became a Chinese specialty, and decorated and lacquered papier-mâché buttons became popular in Europe in the late 1800s.

The use of the pearly shells of sea mollusks in button making increased with the mechanization of production. Shell was separated into its component layers by treatment with a nitric acid solution, and blanks were cut out by tubular saws. Holes were bored in the blanks for sewing, and an engraved decoration was mechanically applied. At first only seashell was used, but in the 1890’s the American manufacturer John F. Boepple began to use the less iridescent but abundant freshwater mussel shells found along the Mississippi River and its tributaries.

In the 20th century, buttons became primarily utilitarian, not decorative, and in many applications were supplanted by the zipper. Buttons began to be made of plastics such as cellulose, polystyrene, and polyvinyl resins; designs tended to be abstract or geometric. Mass-production machines produce molded buttons either by compressing powdered plastics or by injection—forcing liquid plastic into individual molds through small openings.

Some old buttons are considered valuable and are collected for their art and workmanship. The place, date, and name of the maker are usually marked on their backs.